Foster & Co had been operating in the building on First Avenue since about 1914. Before that the building had housed the Trader’s Bank (in 1906) and the Style Shop, a hat and millinery store. In 1960, Lloyd Larson bought out Thor Larson’s share of the business. Dick Larson started as a stock boy in 1964 and has been at the store ever since. Lloyd Larson retired in 1978 and Dick took over as general manager of the store. In 1960, the Larson’s store was selling men’s and boys wear. That year, Lloyd Larson bought the women’s clothing store next door and dubbed it the Princess Shop. The former Marjean’s store was owned by Martha Wyatt and had been operating since 1946. The two stores were joined by cutting a hole in the wall and remodeling. The Larsons bought the building on First Avenue from Jim and Page Parsons in 1970. In 1984, they completely remodeled the building, which included gutting and rebuilding the second floor of the store. Long-time residents may remember the cowboy that used to stand outside. And yes, the cowboy is still around, although since the remodel, he has lived indoors. You’ll need to go up to the third-floor level of the store to pay him a visit. In 2000, Dick Larson and his wife Linda bought the old J.C. Penney store in Bonners Ferry next to the Post Office.

After an extensive renovation of the building, they opened the Bonners Ferry store. In 2010, Dick and Linda purchased the old Miller Hardware Store in downtown Grangeville, from John & Annelle Urbahn. After another extensive building renovation, they opened this third store in October of 2010. 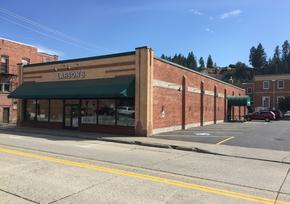 His grandfather Chris Larson began working for Jennestad’s store in the early 1900s. Larsons were later involved in a partnership in the Jennestad and Larson’s store, which opened in 1908. It’s generally acknowledged that the current Larson’s store is one of the oldest businesses in Sandpoint! Dick Larson’s father Lloyd Larson and Dick’s uncle Thor Larson bought all the shares of the J.A. Foster & Co. store in 1940. J.A.

Our Company at a Glance